The Leadman 2012 began with the Leadville Marathon on June 30th. I decided to run in my NB 110s which is a totally minimalist shoe. I wore them during the Ring the Peak run covering a little over 50 miles. I was really beat up at the end, but thought since this was about half the distance I should be OK. Well they were great on the first half which is mostly climbing. I got to the top of Mosquito Pass in good shape, feeling great and on par with my top times on this course. The descent was a different story. Going down Mosquito Pass destroyed me. By the time I got to the bottom, I felt like I had a stress fracture on the top of my right foot, both shins were destroyed as well as my lower back. And to add insult to injury, I caught my toe on a rock and took a nice spill! As far as I was concerned, I was finished. I walked a good portion up the climb up Ball Mountain, and absolutely could not run downhill. At one point I sat on the side of the mountain and contemplated dropping out, which meant my Leadman was over.  I finally decided that  if I quit now I had no choice later, and if I finished, even if I walked in, I had the choice to continue or not continue the Leadman pursuit. I decided to finish, walking most of the way; my legs were just too beat up to run downhill. I finally hobbled through the finish line 1 hr and 6 min slower than in 2009. Ouch!
So onto the Sliver Rush 50. At the last minute I decided to do both the Leadville Rush 50 mile mountain bike race, then the Silver Rush 50 mile run the next day They both follow the exact same course. Believe it or not the key motivator was not for training purposes but because Steve Bremner said he “might” be impressed if I did. Pretty silly reason, but I’m glad I did it.
The Silver Rush 50 MTB has grown by leaps and bounds since 2009. There were close to 1000 on the start, making for quite a spectacle.  I got off to a good start so did not get caught up in the huge queue at the top of the running hill. I pretty much took my time on the climb, just staying within myself, as I have not done of race of this difficulty in almost two years. I felt pretty good but held back quite a bit for two reasons: 1) Two years of no real racing, and 2) I had to run the same course tomorrow.


The Silver Rush course is an incredible course that I will always love. It goes above 12,000 feet four times and is described as “Just like the 100 with all the easy parts taken out”. It seems while riding this course you are either going up or down with no in between. All at over 10,000 feet!  I pretty much stayed relaxed throughout the race, hanging around mid-pack, and striking up conversations with fellow riders. I decided after losing so much time in the marathon that I was just looking to complete Leadman rather than race it. One of the nice things about the Leadville races is they are all out and back courses so you can see the race up front when the leaders are coming back and encourage the riders that are still outbound when riding inbound.  The way back also has steeper (but shorter) climbs then outbound, so there is a lot of hike a bikes over the top of passes. The final climb is approximately 3 miles of dirt road in which I have never been passed. It was no different this year and I was able to continually reel in riders ahead of me all the way to the top.  Finally an incredibly fun 10 mile mostly downhill blast to the finish. I love this section and just love to let it rip here.  As much as I love it though, I did ride a bit conservatively, as I’ve cramped here in previous years pushing it all out down the mountain. Again I finished well behind the mark of previous years but again just happy to be here. 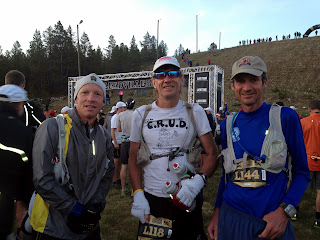 The 3 ultrateers - Dave, Larry, & Steve
So Sunday I woke up wondering what I got myself into. My friend and fellow Leadman competitor Dave Spivey was also doing both races, but he planned on dropping at 25 miles. I thought about that option, but I signed up to do this so I was going to see it through. Besides, Steve “might” be impressed. This was also a great test for my new shoes; Hoka Stinson Evos. Which I found to be incredible. More on those in another post.  The first 25 miles I ran very slow and contemplated dropping out all the way  to the ½ way (turnaround) point. Once I started the return trip I was finally committed,  quit feeling sorry for myself, and just ran.  Although I was extremely tired from the day before, I had a good solid second half. I felt like I ran the last 10 mile descent very well considering I’ve never been a very good downhill runner. Those Hokas are awesome! I finished in a very unimpressive time (over 10 hours) but I felt good and not beat up at all! As a matter in fact I had no problem jumping in my car and driving 2 ½ hours home right after the race. But apparently Steve was not impressed as he mentioned to me his girlfriend Rebekka had a faster time last year. Oh well it was a great workout! 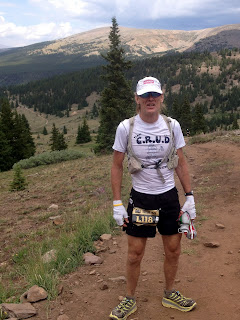