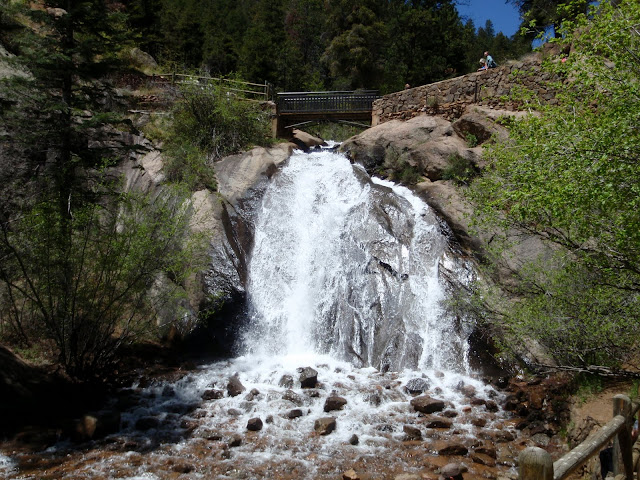 After such a great ride Sunday, I'm really stoked about how fast I healed. No IT pain during the ride! I decided to wait one more day before running just to make sure. So I'll wait until Monday morning. I'd rather wait a couple days then end up having to wait weeks to run.

Tues: The IT Band was feeling pretty good Monday & Tuesday morning. After two weeks of no running, I finally went out this morning. Max, who got up every morning these past two weeks only to be disappointed when I didn’t take him running, went completely bonkers when I said “Let’s go run”. I think he was the happiest dog in the world.

Had a great but short (30 min) run and Max must have chased a dozen rabbits. We came home with Max’s tongue hanging out and what looked like the biggest smile a dog can have.

Went mountain biking with Kevin Cahn after work. Had a great ride with some decent climbing in Cheyenne Canyon. IT band felt good. 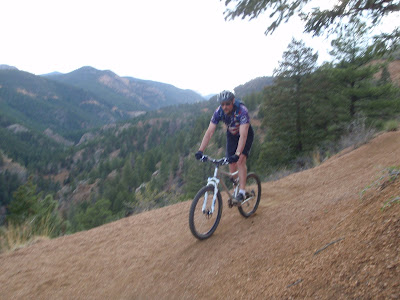 Kevin on Cap'n Jacks
Wed: Went for a short morning run with Max in Ute Park. About ½ hour into it, IT band started to hurt bad. I have no idea why. No sign of it coming on. Pretty much limped the rest of the way home. The rest of the day it was painful just to walk. This is much worse then it was the last two weeks. I don’t know if I can ride a bike. I decided to give it a rest and not ride home tonight. Looks like I won’t be running for a while. Hopefully I can still ride.

Thurs: Still hurting pretty bad. I was able to get an appointment at Synergy Physical Therapy. Wow was I impressed! Lots of adjustments, dry needle therapy, stretches etc. We'll see how it goes, but I'm optimistic. Didn't ride the bike today, so I still don't know if I can ride. Resting the IT band and letting it heal is probably more beneficial then getting in a ride. Maybe tomorrow.

Fri: Took it easy again today. Just rode to and from work. It appears the work at Synergy did some good. The knee felt pretty good today. Still think I’m a ways off before I can start running again.

Sat: Decided at the last minute to enter the Ascent Cycling series MTB race in Palmer Park today. I wasn’t sure if I was up for racing, but it is a local race so I wanted to support it. Got there early and rode the course. This is definitely one of the more technical race courses around. For the Pro & CAT 1 racers they even through in Templeton Trail. This is a very technical trail that has some pretty tricky sections. Spent 1 ½ hours warming up. On the start line there were only 3 CAT 1 50+ racers, so all I had to do was finish to get 3rd. We started with a moderate climb and I took the lead about a ¼ up and opened a gap by the top. Held the lead until we got to the Templeton Trail. Dropped to 2nd and 1st opened a pretty sizable gap through the technical section. After Templeton, there are a series of climbs both technical and non-technical and I regained the lead going up the final climb. Hammered the climb hard to try to open a gap before Templeton. Once we dropped back down to Templeton, I crashed pretty hard. Their web site has a picture of me carrying my bike with a bloody wrist Was able to keep the lead all the way through Templeton but then crashed over the handlebars. Got caught, he actually stopped to make sure I was all right and even held my bike while I got up. I then caught and passed him early in the first climb then hammered every climb to get as big as gap as possible. Had my best pass through Templeton on the last lap and hammered the climbs to win the old guy race. I was a great course and what a difference racing for 1 ½ hours vs. 12 hours. I haven’t had a sustained heart rate that high since last summer! 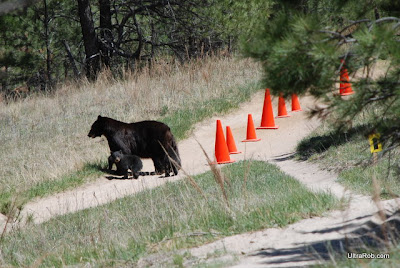 Photo by Rob Lucas (Ultra Rob)
During the race a lot of the spectators were warning us of a bear on the course.  Matt Simmons who was running third in the pro race came around a bend upon a mother bear and two cubs. She reared up, made some threatening gestures and of course he stopped. As racers from behind caught up they were all stopped waiting for the bear to leave. One guy started to go forward but nobody went with him. He stopped and said something like “I’m from Missouri, you guys seem to know what you’re doing so I’ll wait too” Great race, IT band feels decent, had lots of fun, although I’m pretty bruised up from the crashes. Glad I went!

Sunday: Riding with the Girls! 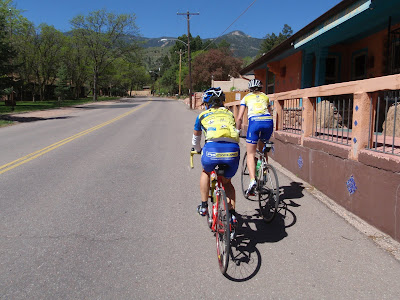 Had the pleasure or riding with Kara Durland (the single speed queen) & Sharon Larsen (the stud of studs) on a recovery road ride, since we all three raced yesterday. We rode for about 2 ½ hours enjoying the perfect weather and this incredible place we call home. Did a couple climbs (Gold Camp & Crystal Park) as well as a loop around Garden of the Gods. I was feeling really good so after Kara and Sharon headed home I climbed Cheyenne Canyon, Orion, and Flying W at a steady (not fast) pace for a total of 5 hours riding and 5,560 ft of climbing. Felt fantastic. My Knee feels fine riding. Iced & stretched once I got home. 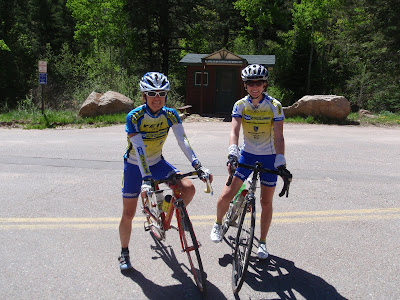 Sharon & Kara
It’s definitely been an up & down week. Everything from wondering if I can even ride to winning a race yesterday and enjoying an incredible ride with two incredible people today. If anything, not being able to run gives me a lot more energy for some quality riding!
Posted by Larry DeWitt at 8:13 AM