A Little of Somthing is Better than a Lot of Nothing

So this week I continued with “maintenance”, running and riding when I can. I know that right now I am very limited as to what I can do, but as long as I can do something I will. I look at this as preservation of muscle memory, making sure that the body doesn’t forget. Eventually, I will get through the treatment and slowly get stronger and stronger. As long as I can keep doing even a little bit, my return will be easier.


A very good friend of mine, Steve Bremner, who is two years my elder, made an attempt Saturday to break his own winter ascent record of Pikes Peak. Steve is a mountain man’s mountain man. He currently has the record for climbing the most 14,000 foot mountains in a 24 hour period. He’s climbed pretty much every 14er in Colorado, has ran a marathon in every state and dozens of countries. Two years ago he ran every marathon in Colorado, which required running back to back marathons on some weekends. He just came back from a week long ultra marathon race in Costa Rica, then did a marathon last weekend. Last year he set the winter ascent record for Pikes Peak in 3 hrs 21 min. Think about that. That’s 13 miles straight up a mountain of 14,000 feet, in snow, ice, wind, and altitude, at 55 years old! So Saturday, one week after running a marathon, he attempted to break his Pikes Peak record. He came up short by 32 minutes but gave it a heck of a try. He sent out a great trip report that (without asking) I’ve appended to this week’s blog entry. There’s a bench in Ute Park from which one can sit and take in the beauty of Pikes Peak. I sat there Saturday morning taking in the sights and sounds of being in nature, and cheered Steve on as he ran up the mountain. 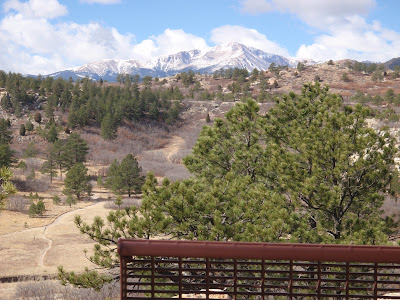 Snow plumes were swirling off the summit when I first got a glimpse of Pikes Peak about two miles up the Barr Trail. The forecast was for winds of 45-50 MPH and temperatures of 25 degrees by 1100 AM when I expected to be up there. I started my journey at 7:40 A.M. at the trailhead proper. My intent was to make a go at breaking the winter speed climbing record of 3 hours 21 minutes that I had set in January of last year, however when I reached the top of the W’s in 27 minutes I knew it was not going to happen. I wasn’t moving fast enough for any number of reasons: carrying too much stuff, ran a trail marathon a week before, getting older….pick your excuse, any excuse will do. Other time hacks at the 7.8 mile-to-go sign (1:10), Barr Camp (1:36) continued to reinforce the realization that it was not going to be a record setting day.

The trail up to Barr Camp was melting out well. Indeed the trail to Noname Creek was dry and from there to Barr Camp no spikes were necessary. I finally put on spikes just above Barr Camp. I followed one set of fresh footprints in the snow, but caught him just before the end of the long switchback before A-Frame. This was also where the trail became mostly un-runable. I cut straight over to A-Frame from the “willows switchback,” reaching A-Frame in 2:34. The creek by the A-Frame was completely frozen over. From here I climbed straight up the slopes, post-holing up to my knees on the soft snow, seeking firm ground on heather slopes as much as I could. Though it was a direct ascent the going was slow. I crossed the trail at the long traverse to the 1-mile-to-go sign about three hours into it. It would take another 53 minutes to reach the summit. As I approached the summit at first I thought the train was up there, then I realized it was the wind. Wow. The wind was screaming like a freight train. After the 16 Golden Stairs sign I angled left and gained the south ridge, popping out on the tracks. I walked the tracks towards the summit house in the face of bitter wind. Finding some shelter out of the wind I put on all my clothes: coat, an extra set of gloves and wool cap.

My next goal was to get off the mountain as fast as I could. I really didn’t want to go back down the rock pile, so I set off jogging down the tracks. Problem was, this was directly into the face of the biting wind. My fingers were going numb despite two sets of gloves and to keep my nose from getting frostbit I had to hold a hand over it. Finally, I rounded the first turn where the wind was mostly at my back. From the summit it is about two miles down the tracks to Windy Point, which is still above tree-line. What did I find there? Three trains, and one of them was coming up the tracks towards me. I called Chewy and we climbed up into the rocks while the maintenance train drove past. I’m sure they must have seen me but they pretended not to. It didn’t take very long before they gave three toots and turned back. Windy Point was the highest point the passenger trains would go that day. I waited until they all had started back down the mountain before I resumed my run down the tracks. Just below treeline the maintenance train had parked and workers were working on the tracks. Chewy and I diverted into the woods until we had passed safely beyond the train, then resumed our run down to the Mountain View station at 10,000’ elevation. At Mountain View it was so hot that I stripped down to short-sleeve shirt before running the connector trail back over to the Barr Trail near the half-mile-to-go sign to Barr Camp. I was running on “six hour legs” by this time and that is not too fast. Even at that pace Chewy was lagging. I realized he was not behind me when I reached Noname Creek. Backtracking I had to go all the way back to above “Town Overlook” before I found him. It was a long day on the mountain by the time I finally got home.