A Different Kind of Ultra 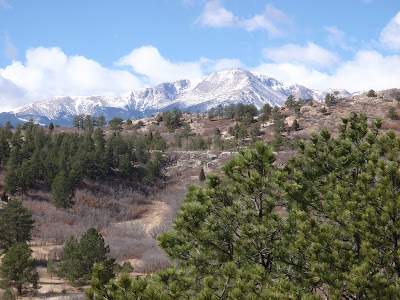 Pikes Peak from Ute Park 3/13/11
The last update to my blog was way back in November. I mentioned that I had some type of a virus and would be taking a break for a while. Well the last 4 months have been anything but a break. The virus I contracted is Hepatitis C. This was a huge shock, and at first I was in denial. I got tested three times before I accepted the truth. The first few weeks after the diagnosis were feelings of shame and trying to figure out how I got it in the first place. I kind of went into seclusion and didn’t want anyone to know. In December I started a 6 month treatment that is anything but easy. It consists of one injection of interferon per week and 2 doses of Ribaviron per day. I have hit a major milestone in that after 12 weeks of treatment I tested negative. I still need to go through another 3 months of treatment to ensure there is no relapse.

My first order of business was to find out how I got it. Hepatitis C is a blood born virus that can only be contracted through mixing blood with infected blood. Hypodermic needles and needles used for tattoos and  are a good source since the virus can stay alive outside the host for up to 4 days. Another fact about this virus is you can have it for 20 – 30 years and never know it. There are no symptoms until the damage is done (to the liver) then things get real complicated. With that knowledge, almost all evidence pointed to my teenage years. I lived a very high risk life back in those days including drugs, fighting, reform schools, incarceration, and homelessness (It was called runaway back then). However I donated blood on several occasions after 1992 which would have been screened. So after more research the evidence points to an incident about 6 years ago. I was riding home from a mountain bike ride in Cheyenne Canyon and came upon a man beating up a woman. I tackled the man and held him down until bystanders were able to pull her to safety. I had open road rash, he was covered with her blood, and I believe that our blood mixed and I contracted HepC. They were both homeless, a very high risk group.

A liver biopsy shows no damage to my liver which supports the evidence that I contracted it 6 years ago vs. 40. With that news, I could have decided not to get treated and just monitor the progress with liver biopsies every five years. I decided that I don’t want to be a risk to anyone and I just want to get this behind me, so I started treatment in December.

What’s the treatment like? It’s nasty! The interferon injections have fairly immediate effects with the worst of it being the first 2 – 3 days. The Ribaviron effects are more accumulative and build over time. I give myself the injections on Friday so I can experience the worst over the weekend and be able to work on Monday. The first few weeks were incredible. I spent the weekend with every joint and muscle aching, chills that were out of control, jaws aching, my eyes felt like they were bulging out of my head and my brain was in a total fog. So completely wiped out, I had to crawl up the stairs. I couldn’t help but laugh when I realized this treatment lasts 6 months. By Monday I am somewhat recovered and am able to go to work, although it is rough as I’m definitely not firing on all cylinders. Each day through the week gets a little better although the brain seems to be foggy off and on. (Not that my brain was all that clear before the treatment). I force myself to do some running and bicycle commuting to work 2 – 3 days a week, but it’s a chore. On Friday I give myself an injection and start the cycle all over again. With time, the weekends aren’t so severe, as I think my body has adjusted somewhat. Some weekends are better than others. Friday was my 14th injection. Although I spent most of Saturday in the fetal position with chills, I still got out and walked (very slowly) in Ute Park with Max for an hour. Today I hiked with Max for over two hours. I’ve found that no matter how bad I feel, if I can just go outside and walk, it helps tremendously. 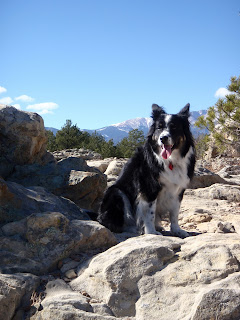 Max doesn't mind that I've "slowed down" a bit
One of the accumulative effects of all this magic is anemia. As I mentioned above, during the week I still try to run and bike commute. It feels like I’m doing everything at 14,000 ft instead of 6,000. I now understand the term “feels like breathing through a straw”. Although I haven’t been consistent, my goal is to run 5 miles Tues AM, Ride my bike home (17 miles) Tues PM, Ride to work Wed, run 5 – 6 miles at lunch, Run 5 miles Thurs AM, Ride home Thurs PM, and ride to work Fri AM. I’ve had different variants such as one Friday I decided to try and run the 17 miles to work. I made it, but what an incredibly rough weekend resulted from that! I quickly came to the conclusion that that was not a good idea! With the anemia, I found that not only do I have to run much slower, I cannot run as far, and I don’t recover very well. Hills, even small ones completely take the wind out of my sails. Sometimes I have to push my bike up my driveway!

During this time, I’ve been overwhelmed by the support and encouragement of my friends and co-workers. My doctor and his staff are definitely among the best. They go beyond the job and provide support and encouragement beyond the call of duty. My wife, Roswitha has been an absolute angel. I think this whole adventure has been more stressful for her than me. She has been there every step of the way, and I think we’ve become closer due to this experience. I know this sounds absolutely ridiculous, but in some sick way, I’m actually glad this happened. I’ve learned so much on this journey. I’ve learned to appreciate Roswitha a lot more and I’ve learned what it is like to be sick. I’ve had employees and co-workers in the past with certain ailments such as cancer, among others. Although I did everything I could to support them, I never really knew what they were going through. Now I have a clue, and this will help me understand and associate with friends and co-workers who experience anything similar in the future. I’ve learned that suffering is a frame of mind and the whole experience can change with your thoughts. I kind of already learned this from ultra runs and rides, but now I’ve definitely been given the opportunity to put this theory to the test. If you focus on the suffering things get worse and one runs the risk of depression. I’ve learned the easiest way to avoid depression (a side effect of the drugs) is don’t feel sorry for yourself. It’s that simple! When things are the worst, I just tell myself over and over again, “something good will come out of this”. I write that down every morning and I believe it makes a huge difference. I encourage others who are suffering from some sort of sickness or treatment to not focus on the suffering, don’t feel sorry for yourself, and focus on what you can learn from the experience. It does make a difference. Some of our best lessons are the hardest. Yesterday while I was in the fetal position most of the day, I visualized running in the mountains, effortlessly enjoying nature, and the feeling I could run forever. I suddenly realized I was grinning from ear to ear! It will come again. 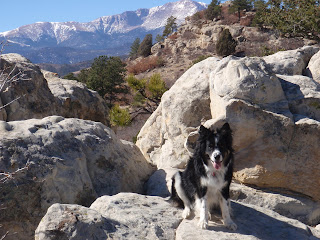