A Rough but Productive Weekend

﻿﻿﻿﻿﻿ My attempt to run to the top of Pikes Peak with Steve Sat didn't go so well.  Everything was going fine until we got above tree line. Above tree line there is a lot of ice and snow drifts on the trail. The hard crusty kind, so Steve has a route that goes straight up the rocks. For some reason once we got about  13,000 ft the altitude really got to me and I couldn't take more that 3 - 5 steps without getting dizzy and losing balance. Steve was getting cold waiting for me and it was looking like I wasn't going to make it anyway.

So I turned around... and this is where the real adventure began. Somehow I missed Barr Trail and continued straight down the mountain. I ended up in a very steep rocky area with lots of ice, snow and drop-offs. So I headed to the left to where it didn't seem so steep. I was basically in a basin between two rocky areas heading down. The problem was it is a basin which means snow, deep snow. I spent at least two hours in deep crusty snow on a steep descent. Sinking to my waste, falling and then barely able to get up because my arms sank when I tried to push myself up. Several times I looked at Max and said “well buddy what have we got ourselves into today. To me it looked like the only way out was to continue down. I was only wearing running shorts, a running jersey and a gortex wind breaker. After a while I started becoming hypothermic.  My legs were torn to shreds in the crusty snow and a few times I fell sliding down the hill grabbing tree branches sticking out above the snow to slow me down. Every time this happened I left a nice trail of blood in the snow. I was getting exhausted, not able to control my shivering and beginning to worry a bit. Every time this happened I told myself I’ve been in rough spots before and whatever I do I will not give up. I kept heading down hill and eventually the snow became less difficult. 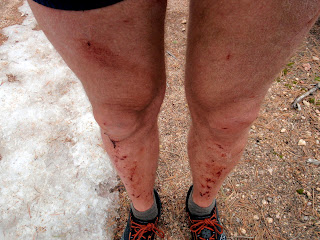 Me Legs all Scratch up

Somehow I popped out on Barr trail between the A-Frame and Barr Camp. I was shaking so hard I could barely get my running spikes on, then, ran as fast as I could to Barr Camp trying to warm up. At Barr Camp I was given Hot Tea and Hot Water, warmed up a bit and continued down. At No Name Creek I completely bonked. I was now 7+ hours into this fun little adventure and the only thing I ate all day was a Cliff Bar that I shared with Max and a couple small pancakes at Barr Camp (that I shared with Max). So I sat at No Name and found a Cliff Bar in my Camel Back and shared it with Max. A few minutes later I was feeling OK and we continued down the trail getting to Steve's house in a little over 8 Hours. (Steve had run the Cog Railroad part of the way down and had been home for about two hours).  And to think I had considered running the St. Patrick’s Day 5k run instead. Now that would have been boring! 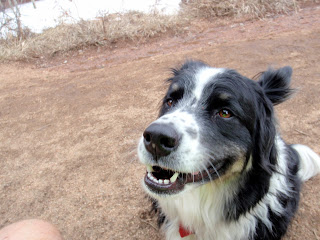 Sharing a Cliff Bar with Max

Sunday, although tired from yesterday’s fun, I couldn’t help but join Sharon, Kara, Jeff, and Kevin for a great mountain bike ride. A nice 6 mile climb up Rampart Range,  a steep technical descent down Williams Canyon, another steep climb out of Williams Canyon over to Waldo Canyon and them some incredibly fun Single track off Ute Indian Trail back to Manitou Spring. The trails were great and the company fantastic and it was incredibly fun despite the crashing in Williams Canyon. No big deal, gonna have sore ribs for a few days. After we got to Manitou, we picked up Mountain Man extraordinaire, Steve Bremner and he and continued on another 3 or so hours in Red Rocks and Cheyenne Canyon. I finished the day out with just over 7 hours of riding and bruised ribs. 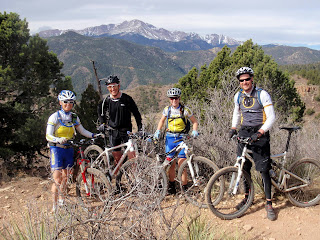 The Gang!
So all in all a pretty incredible albeit rough weekend. Going to work on Monday, I felt like I qualified for handicapped parking. I am currently pretty beat-up, but it’s the end of a 3 week training cycle which means this is a rest and recover week. Fantastic way to end the first 3 week cycle in my 2012 quest  for Leadman!
Posted by Larry DeWitt at 8:21 PM