Feb on the Bike

Plantar Facetious can be a stubborn injury. After weeks of absolutely zero running, lots of stretching, icing, and doing all the things one is supposed to do my foot is still not ready to return to the runner’s world. At the end of six weeks it felt like the pain was completely gone so I gave it a shot and went for a very slow three mile run with Max. It felt OK with no pain. I waited two days and did a four mile run; still no pain. The following weekend, four miles on Saturday and seven on Sunday. Slight pain Sunday evening but gone by Monday. Seven miles on Tuesday and still OK. Thursday an eight mile run and the pain returned, not bad, but it was back. So with that I’ve decided to scratch running the Ave of Giants Marathon and pretty much scratch running altogether and focus on mountain biking, this year.

The good news is without all the running, I am feeling very strong on the bike. Training has been awesome and I can feel my power and enthusiasm returning to pre-running levels. I look forward to hard intense rides and am beginning to feel like I belong in fast group rides again. Max certainly misses the daily runs, but I’ve been taking him out mountain biking 2 – 3 times a week; albeit on  dark & chilly 4:30 am February mornings!


﻿﻿In my opinion there is a big difference in training for cycling  vs running. Maybe I’d change my opinion if I trained specifically for running, but I feel cycling requires much more “intense” training than running. Running races (and running in general) is much more steady then cycling. In running one tends to go at a consistent effort while cycling is much more like doing intervals for hours at a time. I once ran a 10 mile race and my average heart rate was 160 beats per minute.  I rode a three hour mountain bike race and my average heart rate was 160 beats per minute. However when the heart rates were graphed they didn’t look anything alike. My run graph was almost a straight line with my heart rate pretty much steady between 158 and 162. The graph from the mountain bike race however was all over the place, ranging from the low 140s to the low 180s.  So in that respect the two disciplines are nothing alike.
February has been very unseasonalably warm in Colorado Springs, with temps in the 40s and 50s during the day and very little snow. While this isn’t a good thing for the environment, it does provide the opportunity to get in some decent training. So far this winter I’ve been consistently getting in 200+ miles a week of riding. This is mainly due to not sharing my workouts with running but the abnormally warm weather is also playing a role.  This week was almost perfect - two good hard tempo rides, a super hard mountain bike ride with the God and Goddess of Single Speeds; Dan & Kara Durland, and a long 4 ½ hour road ride to end the week. 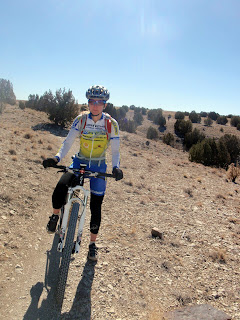 This week was also the third week of a four week cycle, so I’ll be taking a much needed rest next week. Taking a rest week every four or five weeks really helps recharge the batteries both physically and mentally which in the ends helps prevent burn-out or getting into a rut. The last three weeks have been the most consistent, hard, and disciplined training I’ve done in a while. Maybe because I haven’t been mixing the running and biking. I feel good about my progress. I’m looking forward to a rest week and then taking on the next cycle and preparing for a summer of hard racing and adventure!
Posted by Larry DeWitt at 3:00 PM