Playing in the Snow!

Despite the fact that this was a recovery week, it was full of variety and I got to mix things up very nicely. We finally got some decent snow, so Max and I went snow biking. Well I at least rode the bike. Max ran, mountain biking is a trick he hasn’t quite mastered yet. I also got in a couple short runs with no sign of pain, so I’ll start bringing running back into the routine. My focus will still be mountain biking this summer though.


When Max and I ride/run in the early morning, we run along a creek and Max often lurches and growls at the other side. Since we are up way before sunrise I cannot see anything but darkness, so I had no idea what has been grabbing his attention most mornings. This week we had bright fresh snow reflecting the light from the stars and moon almost making it seem like daylight. When Max started lurching at the creek, I looked over and saw a coyote on the other side running along beside us. He ran with us for quite a way before disappearing off through someone’s back yard. As we got a mile or so further Max took off like he was chasing a rabbit and disappeared around a turn in the trail. As I come around the bend I saw him chasing a coyote much bigger than himself. A smaller coyote came out from a clump of bushes and Max went after him. This one seemed to be much younger and actually appeared to want to play. Max and the coyote seemed to be playing, running in and out of the trees until Mr. Coyote saw me approaching and then decided to beat feet out of the area. Max started to go after him but I called him back and we continued our run. Another mile or so later out of the corner of my eye, I caught yet another coyote running alongside us on the other side of the creek. Throughout the rest of the week, I spotted at least one coyote during our morning run/rides. The night, illuminated by the snow’s light reflection, enable me to see these guys when I otherwise wouldn’t. Judging by Max’s reaction, they’re there every morning, I just never saw them until now. 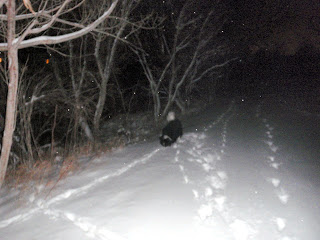 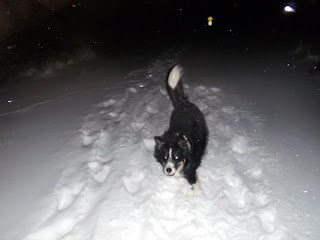 
As much fun as it is to play in the snow, it can be a bit treacherous when commuting to and from work. It appears the city of Colorado Springs forgot there is a northern part of town, at least when it comes to snowplows. Many of the side streets through the neighborhoods have turned to solid sheets of ice. I almost went down once in traffic but somehow stayed up after hitting an icy patch. I did go down on a side road with no traffic and slid about a 100 feet on my chest and face. Lucky it was all ice so no road rash. Other than that, I welcome the snow, we certainly need it. And it is SO fun to go snow biking on the trails.


As far as training, it was quite a mix this week. Snow biking, commuting, road riding, trainer rides, and a couple runs. And this was an easy recovery week! Next week, starts another four week phase that will raise the bar for both intensity and endurance. Looking forward to it! 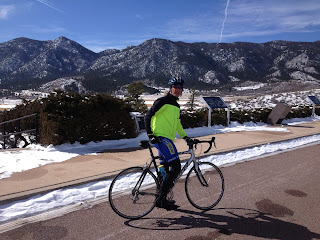 Hitting the Hills at the Air Force Academy
Posted by Larry DeWitt at 3:50 PM