Snake River Challenge was Quite the Challenge!

Climb, climb, then climb some more. That has been my motto over the last month and at Snake River it paid off. One of the things I love about racing is the training. I can’t explain it but I love to go out and ride all day in the mountains. It doesn’t matter if its road or mountain bike. And yes I love finding a long steep hill and climbing it again and again. Since I averaged over 20,000 feet of climbing each week this month, June was a great month.  This included awesome rides like the 111 mile Breckenridge – Copper – Leadville – Minturn – Vail – Copper – Breckenridge Loop and the Mt Baldy – Jones Park – Pipeline trail MTB Ride, etc. I even got in on the Colorado Springs Sunday group ride, which I haven’t done in years.

﻿
So with all that climbing I felt very good about my chances at the Snake River Challenge.  Kevin Cahn, Ralph Bateman, Dave Andrus, and I went out a week before to pre-ride the course. For some reason every time I pre-ride a course I find a section that makes me nervous. This time it was the descent down a black rated trail called TNT. Trails at Keystone are rated by their difficulty just like ski runs; Green – easy, blue – moderate to difficult, black – difficult to crazy. So all week I thought about this trail and if I was going to crash and get seriously injured. I can’t count the times that I’ve lost sleep about sections of various courses after I pre-rode them. What happens every time though is once the race is on I focus on racing and the trail doesn’t seem anywhere as dangerous as I had built it up to be. So was the case at Snake River. 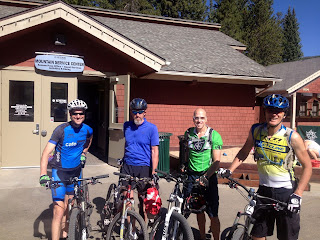 Four Old Guys Still Playing Like Boys
Snake River Challenge is a 3 lap course at the Keystone Ski Resort that amounted to 55.7 miles and 10,217 feet of climbing. Although we did three laps we essentially climbed the mountain six times. Right from the beginning we started with a steep dirt road climb that led to a single track that zigzagged its way up the mountain, ending about ¾ from the top. We immediately jumped on the “blue” Mosquito Coast trail which took us almost back down to the bottom of the mountain. From there we climbed a dirt road to the very top at almost 12,000 feet. We then proceeded to a trail called 11-7 (due to it being at 11,700 ft) which was a rolling fun trail interspersed with rock gardens to keep you honest.  This trail looped back around to the top of the mountain from which we descended a series of black, blue and green trails to the bottom. These trails were rough, and TNT was especially steep, rocky and loose. 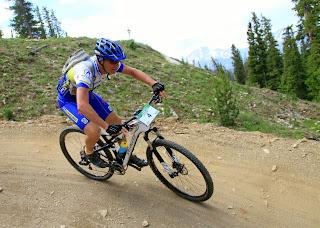 Lettin er Rip
(Courtesy of Mountain Moon Photography)
So the first lap went well, although I struggled a bit on the initial single track climb. Once we descended and started the second climb up the road I found my rhythm.  Even though it is a long and steep climb I was enjoying it. Hit 11-7 with good speed right through the rock gardens and powered up the short punchy climbs. The descent went like a dream and even though it was extremely rough, I felt so smooth and fast coming down. On the second lap I felt even better on the climb and after finishing the 11-7 loop, I knew I had enough in the tank to really push on the third loop. But that is where I ran into a problem. 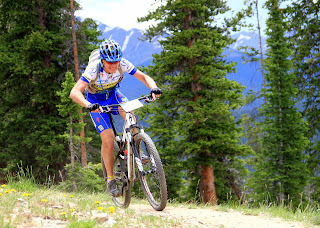 Awesome Trails in an Awesome Place
(Courtesy of Mountain Moon Photography)
On the descent through the TNT section I slammed my back wheel hard against a rock and heard something break. I didn’t know what it was until I tried to shift gears and nothing happened. Stopped and realize I broke my derailleur cable and only had one gear in the back which was the smallest cog or hardest gear.  I continued down knowing that there is no way I could do the third lap climb in that gear. 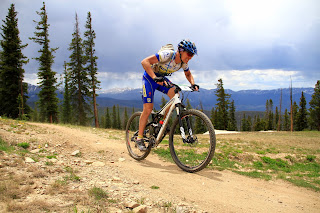 Spent most of last lap standing while pedaling
(Courtesy of Mountain Moon Photography)
Each lap starts out especially steep right off the bat. I could not turn the pedals and had to push. When it got less steep I would attempt to ride, but I was up out of the saddle barely able to turn the cranks. And this would only last a couple hundred yards before I had to get off and push again. I began thinking this was useless and I might as well turn around and call it a day. Just as I was about to give up, the trail would flatten out just a bit and keep me going. Then off and pushing again and wondering if I should turn around. Upon hitting the single track another racer suggested adjusting the high limit screw and see if the chain would move up a couple of cogs. I did and it worked. I was able to move it up two cogs making it two gears easier. It was still extremely hard but at least it was doable. For the rest of the climb I tried to get momentum whenever I could then punch as hard as I could sometimes barely turning the cranks to get over the next steep. This went on for what seemed like hours. Everything hurt, my back was screaming, my calves were screaming, my lungs felt like they were going to explode, and my heart felt like it was coming out my chest. Not to mention after particularly hard efforts I got light-headed.  This was most likely due to working so hard at such the high altitude. Despite all this I was passing people all the way up the climb and nobody passed me. Finally the top but no reprieve; still had to do the 11-7 loop, which almost did me in. This loop had a lot of short punchy climbs through rock gardens that were incredibly hard to get through in that gear. A thought did occur to me to just throw my bike down the mountain and sit on a rock and die. But then I was so close to the descent, I couldn’t just give up. Finally off the 11-7 loop, up the short single track to begin the descent.


The descent was such a relief.  I didn’t go as fast as I could have, because I thought how much it would suck if after all that I got a flat on the way down. Finally down to the finish. Made it! And second place in the old guy’s category to boot. I found out later only two guys in the old guy’s category finished, but I’ll take it. So in the end, I came out in pretty good shape, still holding the lead in the overall series.  One more race - the Mighty Breckenridge 100. It’s been said, that Snake River Challenge was just a warm-up.
Posted by Larry DeWitt at 9:11 PM