Rocky Mountain Endurance Series – Kinda like Leadman without the running! What a spring it’s been so far. Kevin Cahn and I signed up for the whole Rocky  Mountain Endurance Series, which is six ultra-endurance mountain bike races spread through May, June and July. The first four were two weeks apart from each other and now we have a four week break before the two monsters; Snake River and the Breckenridge 100. I got to give a big hand to Kevin. In his first season of real racing he chose to go with hard core of the hard core and he’s hanging in there just fine.
So the first four races are history, and it’s been quite the adventure. It’s the first time in years I’ve focused exclusively on mountain bike racing and it showed. I’m getting there though. Last week I made the podium in a big race for the first time since my Hep C adventure. It was also the first race I felt like I was racing instead of just riding. A great feeling!


A quick summary of the races so far:
Ridgeline Rampage: I was pretty nervous leading up to this race. I pre-rode the course the week before and it was deceptively hard. There were no huge climbs but tons of little ones. Tight twisty single track for most of the course with ups and down throughout. This kind of course can really wear on you.  I started very conservatively with this in mind but pretty much never got out of that mode. We were doing six 20 mile laps for a total of 60 miles. I got passed toward the end of the 1st lap by a 65 year old. I thought “no worries, I’ll see him later”. Didn’t happen. That guy is now my inspiration! I stayed conservative through 5 laps, worried that I’d blow up, then finally picked it up the 6th lap. I rode like it was a one lap race, passing tons of 20, 30, 40 year olds, but no 50 year olds.  (Our age is written on the back of our left calf).  Where were they? Obviously way ahead of me.  Finished 5th in the 50+.  5 hrs 28  min, 5,288 ft climbing. Good to be back. 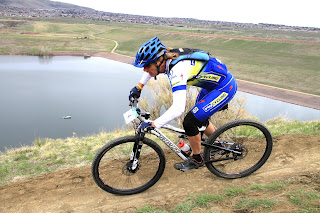 The highest Point of Battle the Bear


Battle the Bear: I’ve done battle the Bear before and it’s a fast non-technical course with five small climbs per lap for six laps. I think I had a good race, but results were a little disappointing. The start was fast right out of the blocks.  Started out with the lead group, but two guys took off the front and there was no way to go with them and hold on for the whole race. Got in a group of four and we went back and forth through the first lap. Starting the 2nd lap one got away on the first climb. I was able to out climb the other two but they would close in on me on the flats or when I got stuck behind younger age group riders. Went back and forth through the third lap, then I pitted on the fourth and got left behind. Chased pretty hard through the 4th lap, then for some reason got a bloody nose on the 5th. Spent the 5th lap trying to make my nose stop bleeding, because I was bleeding all over everything. The 6th and final lap I opened it up and hammered the 1st half. Then I got caught behind what looked like 100 kids in the kids race. Just had to fall in the crowd and pretty much shut it down. Some of those kids were really shaky (and scary to watch) on the descents. I certainly didn't want to put any extra pressure on them trying to get around them. Anyway, finished strong and was consistent through the whole race. Just couldn’t put in the extra effort and respond to the attacks. Finished 6th in the old guys category. 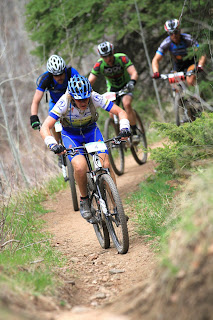 A long Fast Descent at Indian Creek
Indian Creek: All I can say is Wow! 53 miles and over 9,000 ft of climbing. Among the hardest if not the hardest 50 mile mountain bike race I've ever done. Absolutely Brutal. By the end of the 2nd lap (of 3) I was not racing any more, just focused on finishing. On the third lap it was total survival. Just keep pedaling. Lots of hike a bike, and long descents, followed by long steep climbs. I was definitely  not on my game descending and really lost a lot of time on them. Finished 7th out of 7 finishers in the old guy race. About half the field DNF'd.  Even though I felt good in the beginning, I felt I wasn't climbing as well as I used to, and my descending was very slow. Really need to work on that. 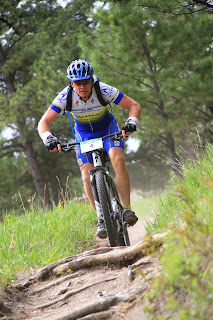 Lettin er Rip at PV Cycle Derby
PV Cycle Derby:  66 miles 5,000 ft of climbing. The best race of the year so far. For the first time I felt like I was racing from beginning to end. Awesome course with tons of single-track and good mix of technical. Very similar to Palmer Park and Ute Park type riding. Went hard the 1st lap then relaxed on the 2nd lap as this was going to be a long day in the saddle and I needed to stay relaxed through the technical sections and not be all tense. The 3rd lap, especially the 2nd half really turned it on, pushing it the hardest I’ve pushed so far this  year. Felt like my old self again! Caught and passed several guys in my age group and finished third. As I mentioned earlier, my first podium finish in a few years.


So after four races I’m actually leading the series for the old guys. Not because I’m the fastest, but the only one to complete all four races. The two big ones are coming up though. I think Snake River is going to be brutal, and the Breck 100 is one of, if not the toughest 100 mile mountain bike race in the country. So the training theme over the next few weeks is climb, climb, then climb some more. When I get to the point that I think I can’t climb another hill, climb two more!