Almost simultaneously with the attack on Pearl Harbor, the Japanese attacked several other Pacific islands to include the Philippines. After three months of intense battle, defending the Bataan Peninsula Philippines, American & allied soldiers, starving, low on ammunition, suffering from Malaria and other diseases, surrounded with no chance of re-enforcements, were surrendered to the Japanese. This resulted in what’s known as the Bataan Death March. A 60 miles forced march of 70,000 Filipino and American prisoners of war through atrocious conditions. Beheadings, cutting of throats, casual shootings, bayonet stabbings, rape, disembowelment, crushed skulls resulting from rifle butt beatings, and denial of food or water were all part of a week long march in the tropical heat. Falling down or inability to continue moving was a death sentence, as was any sign of protest. Those who fell were bayoneted and/or run over by tanks or trucks. Those who stopped to help a fallen comrade were also bayoneted. In some instances trucks with Japanese soldiers drove by with bayonets out, slicing the marching prisoners’ throats. When passing a stream, prisoners who broke ranks and went for water were executed. Thousands died on the way. Only 54,000 reached the camp. Once the survivors reached camp, conditions did not improve. They continued to be tortured, starved, and executed in various prison camps scattered throughout Japan & the Pacific. For over three years these men endured unimaginable torture, disease, and starvation. As Japan started losing ground in the war and got word of possible War Crime Trials, an order to execute all witnesses (prisoners) was given. Over 150 American POWs were herded into raid shelters, doused with gasoline, and burned alive. Almost three years after the surrender of Bataan, US Army Rangers along with Filipino Guerillas, pulled off the most daring and successful raid in US history, resulting in the liberation of 512 POWs from Camp Cabanatuan. 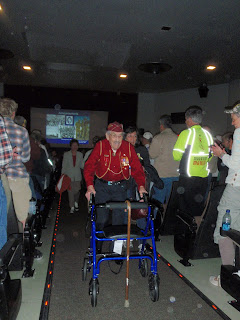 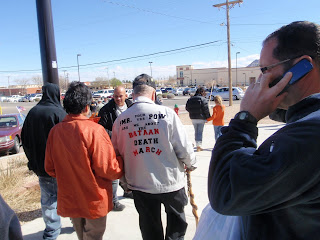 The Bataan Memorial Death March Marathon is much more than a marathon. It is a weekend of history, emotional ceremonies, meeting and hearing the stories of the dozen or so remaining survivors from this unimaginable ordeal, celebrating our freedom, mingling with people and soldiers from all over the world (Japanese soldiers don’t participate) and running an incredibly scenic marathon on trails through the open desert.

The event starts Saturday with seminars on the history of the Battling Bastards of Bataan, the death march, and the death camps they were subject to for over three years. Then you get to meet the survivors, hear their stories, and ask them questions. A very well organized Pasta party in the late afternoon followed by a free showing of The-Great-Raid: a movie depicting the heroic rescue of the POWs from Camp Cabanatuan.

The start of the marathon was definitely unique. It began with very moving ceremony. Then we were herded in different staging areas (5,700 participants in a plethora of categories) and as we approached the starting line, the survivors shook our hands as we passed.

Once we started I was very surprised to find myself up front in a group of four. After ¾ of a mile, although the pace felt comfortable, I looked at my Garmin and saw we were running about 6:30. Way too fast. I backed off and was caught by three guys and stayed with them for the next two miles. We were still running about 6:40 – 6:45 which again I thought was too fast. (I learned a lesson about going out too fast in the Akron Marathon). So I backed off again. One of the guys backed off with me. I mentioned to him I was too old for that pace. Turned out he was in the same age group as me. For the next 4 or 5 miles we took turns taking the lead, kind of yo-yoing each other until we hit the first major climb. At that point I started to pull away. The climb was a long 5 – 6 mile (I think from miles 8 – 14) that is very similar to Rampart Range Road, a regular part of CRUD runs. I steadily pulled away and slowly started catching the two (5th & 4th places) as we climbed further. I didn’t know how hard to push because I didn’t know how long the hill was. It got the steepest the last mile or so and I almost closed on them. We then ran fairly steep downhill for a couple of miles in which they got away. I tried my best to open it up and let it fly, but my hamstrings were just too tight and I couldn’t open a good stride. Note to self, I REALLY need to do more stretching or yoga or something! By the time we got to the bottom of the hill I was caught from behind from another runner. At this point the course turned into steep rollers along a ridge line. For the next 2 – 3 miles I would open a gap on the ups and he would close it on the downs. We completed a loop by joining back on the same road we ran up about two miles into the climb. We were now running in the opposite direction of the hundreds of runners & marchers going up the hill. Most were soldiers in uniform, some carrying 35 lbs rucksacks. I began falling behind on the descent, again, my hamstrings just wouldn’t stretch far enough to open my stride. It was very cool high fiving the soldiers going up the hill as I was coming down. At the bottom of the hill we turned on to the trail that everyone talked about. The sand traps. This was a long section of very deep sand. The rest of the course was in open desert and sandy, but this was deep and slow going. I tried to run as light as possible and not power through. We were also passing the half marathoners who were mostly walking this section. The guy I ran the ridge with was now out of sight, and with about 6 miles ago, I was starting to get into the survival mode. “Just keep running, stay relaxed, don’t cramp, think positive, take in the mountains and the views” type thinking. The sand pit seemed to last forever, and finally after passing the 22 mark the trail seemed pretty solid. It wound and twisted and never seemed to end. I was passing through hoards of ½ marathoners listening to their IPODS therefore having to zig-zag quite a bit to avoid them. Shortly after passing the 24 mile marker, we passed an aid station with one of the volunteers yelling 2.8 miles to go. I don’t know where he got that, but it was a bit demoralizing. I had some doubts as to how far the finish was after that, but told myself it didn’t matter just keep running. Once past the 25 mile marker, I tried to run the last mile as fast as possible (which wasn’t very fast) and not get caught from behind. I was able to hold on and finished 7th overall and 1st in the old geezer category, in 3:19:41.

The rest of the day was filled with a party only the army can pull off. They put on a fantastic barbecue, great music, with military and civilians just chilling out and enjoying a great weekend. I couldn’t help but look around, take in the scene, and think about what our veterans and soldiers sacrifice, to protect us from the brutality so prevalent in the world so we can have weekends like this. It was truly an honor to meet and shake the hands of the Battered Bastards of Bataan. 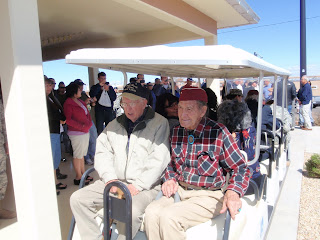