I signed up for several races and events through June of this year, so I committed to some big runs and rides. Man, there was a time when Ultra events were easy to get into. Now you have to sign up as soon as registration opens or risk not getting in. That’s exactly what happened with the Gunnison Growler. The Growler is one of the coolest mountain bike races out there. 64 miles of technical single track. Unfortunately it sold out in less than 12 hours and I didn’t get in, bummer. I have yet to finish that race. The first year I DNF’d with a broken derailleur, last year I was signed up but had to work… Next year!

So I’m signed up for the Bataan Death March in March, which is a tribute to the real death march in WWII. It’s amazing that so many people are unaware of this atrocity. One of the cruelest and savage treatments of American & allied troops in the war, yet so few Americans are aware of it. It’s an honor to participate in an event that pays tribute to these brave soldiers who experienced un-imaginable horror, hardship and suffering.

I also registered for DawntillDusk in April, an incredibly fun 12 hour mountain bike race of 100% single track. In May the Collegiate Peaks 50 mile trail running race, one of my favorites. Then a 7 Day Bike Tour of Colorado in June. So I'm commited to a handful of very tough races this Spring.

I’ve been seeing a lot about barefoot running lately. It’s something I’ve been doing for years at least two times a week during the Summer. Its turning out that running barefoot or at least barefoot style is the right way to run. Go figure, we’ve only been doing it for tens of thousands of years. Somehow the invent of the running shoe changed all that. I’ve got to find a way to run barefoot a couple of times a week in the winter. Time to dig out the Vibram Five Fingers. 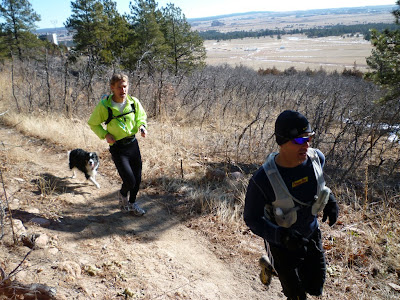 Training this week went very well. The days are gettng longer, and sunrise a bit earlier. It doesn't seem to matter how long I live here or how many mornings I see the sun rise upon Pikes Peak, it's always a truely amazing sight. Now I begin building on the previous blocks of base building. This week and in the coming weeks, I’m adding intensity with Tempo rides, big gear hill climbs, and tempo runs, in addition to keeping the volume high. I haven’t been able to do much strength training as my wrist is not healing as fast as I would like, but I am doing CORE, squats, and some upper body exercises that don't require pushing weights, such as rowing and Lat Pulls. I've never been much of a milage tracker but I did note that I had over 1,000 miles on the bike this month plus some where around 240 miles running. Nice way to start the year. This Week's Log: