Continued base building this week. The sturdier the foundation the harder I can train and race this Summer. It's important to build a really strong base to work from over the Winter and so far I think I'm building one of the strongest foundations in years! This week was another great week of riding and running despite the sprained wrist.
I took a day off Monday to let my wrist heal but Tuesday was back at it with an early 1 hr 45 min run with Max. We finished just as the sun was rising to display a majestic snow covered pikes peak. What an incredible way to start the day. I took my bike to work with the intention of riding home but my wrist was still pretty sore so it was the trainer again. While driving home I was dreading sitting 2 hours on the trainer when the weather was the warmest in months. But once I got started it turned out to be quite an intense workout; probably better than if I had rode home!
Wednesday, early in the morning for an hour on the trainer, then an hour plus lunch run of steep climbs and descents on the Columbine Trail in Cheyenne Canyon. The trail was still hard pack snow even though it was something like 58 degrees. A Winter scene that felt like Summer! I had to work late to make up for taking such a long lunch break but it was worth it! 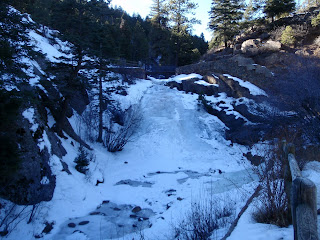 Even at Almost 60 Degrees Helen Hunt Falls is still Frozen

Thursday, early morning 1 1/2 hour run with Max. Max got into a bit of a tangle with a raccoon, but luckily the Raccoon wasn't interested in fighting and climbed a tree. That raccoon was just about the same size as Max and could have tore him to pieces. In the evening, I was able to ride home. It usually takes a little over an hour but I added a loop around Garden of the Gods and a Climb up Flying W to make it a just over 2 hours. Riding Garden of the Gods this time of year is pretty serene. The tourist are gone, there are no street lights, and I pretty much have the place all to myself. A very peaceful ride if you don't think about mountain lions.
Friday an easy ride to work of just over an hour. OK, now I ride to work early in the morning. It's usually cold. This morning I believe the temperature was in the upper teens. It's also dark. I saw a guy running in shorts and no shirt. I'm not sure what his point was, it's not like he's getting a tan or anything. He was just running down the trail in the dark, in the cold, with no shirt or tights. He did have gloves on though. 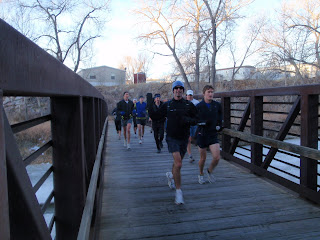 Saturday long run with CRUD. Today was not a typical CRUD run. We actually ran! Normally we are on steep mountain trails with questionable footing, and a CRUD outing is part running, part climbing, part hiking, and part surviving. Today was more like normal marathon runners, with a relatively flat course, good footing, and even talk of speed! We started downtown then North on the Santa Fe Trail for 1 1/2 hrs then turned around and ran back at what some of us like to call fast. A CRUD speed workout of sorts. The distance ended up being just under 23 miles and I suffered pretty good on the last 5 miles. Only CRUD would call 23 miles a "speed" workout. The weather was incredible. Mid 20s when we started and near 60 when we finished. Once home, I rode for about 45 minutes on my road bike to flush out the lactic acid in my legs. Beautiful day! 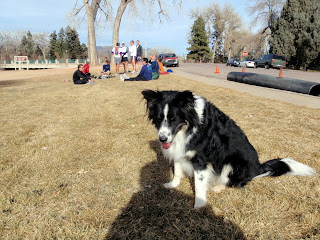 Sunday long ride alone. Couldn't find anyone that wanted to go ride 100 miles today, so hit the road early, headed East and just rode with no particular plan other than ride. The weather was amazing for January. Mid 20s starting out, but mid 50s by the time I finished, and no wind. Colorado Springs has got to be one of the most perfect places for riding. For road riding, East is miles and miles of prairie, ranch land, rolling hills and no traffic. West the Mountains, North the Air Force Academy (the world championships were held there once), and South rolling hills and Cheyenne Canyon. Then there is unlimited miles of trails for mountain biking and trail running. Today's ride reminded me of how lucky I am to be living here. Finished up by riding to the West side of town for a loop around Garden of the Gods and a climb up Flying W. Rode like I felt, and just enjoyed a day on the bike. The only issue was my wrist hurt a bit, especially after four hours, but nothing major. All in all a very good week. After three good weeks, next week will be a bit of a recovery week 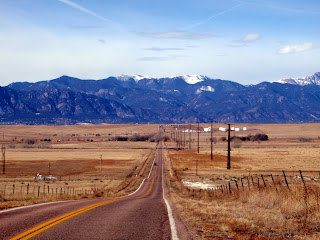