Saturday CRUD long runs are almost always epic. This week was no exception. We did a 20 mile loop up Gold Camp Road (A dirt road closed to motor traffic), down Old Stage, then climbed the Columbine Trail back up to our starting point on Gold Camp. We started just above Helen Hunt Falls and proceeded to run a steady climb of 8 miles topping out just under 10,000 feet. We had a pretty big group starting out and the fast guys started pulling away after 2 miles. We also dealt with quite a bit of snow and the higher we climbed the deeper and slicker it got. This was the melted & frozen, melted & frozen type of snow. Ankle twisting crusty break through snow. But that's what made the run epic. Just another aspect of running in the mountains of Colorado. Slow going but still fun, a typical CRUD run. Big difference from last week; 23 miles just under 3 hours. This week, 20 miles just under 4 hours.

Sunday a very enjoyable mountain bike ride that covered four parks in Colorado Springs: Ute, Palmer, Red Rocks, & Garden of the Gods. Good times with a great group of guys and gal that made for a fun winter ride. The trails were very slick in places with us having our share of wipeouts. I was a little apprehensive, as my wrist is still sore and after coming off a couple big hit drops, my wrist said enough. We stuck to less technical trails after that. Luckily my two crashes were on the left side, so I didn't fall on my bad wrist. In the end over five hours of trail riding with well over 3,000 feet of climbing. 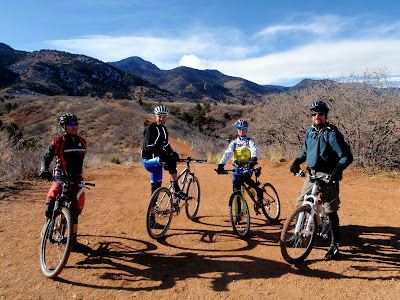 Unlike the weekend, the week leading up to it was pretty much a recovery week. Let the body absorb all the running and riding from the previous three weeks. I cut the normal distance as well as the intensity of the week's runs and rides and felt totally recovered by the weekend. Sometimes recovery weeks are the hardest for me, because I want to keep going and have to force myself to cut runs/rides short. I probably should have went a little shorter over the weekend but just couldn't help myself. I love these epic rides and runs too much. And I can't really explain why, I am simply passionate about running and riding my bike. I have been for almost 40 years now. I often wonder how much riding & running I'd do if I was independently wealthy or retired. My guess is a lot!